Now that we have a field relay node design for capturing the soil moisture data and sending it to a LoRa gateway (based on the RAK / Raspberry Pi gateway), we are looking to optimize signal strength in the system.

Several resources are available online around this. I'll record them here later; but in particular, the tutorial I found particularly relevant was this one by Andreas Spiess: "What you always wanted to know about Antennas and nobody told you". Summary lessons from this video:

The above leads me to think that our $50 Sparkfun LoRa Fiberglass Antenna, with its 5 dBi gain, is likely sufficient. I was able to achieve 5 miles line-of-sight communication between relay node and gateway using this antenna. The key variables to improve range seem to be: maximizing line-of-sight by increasing the height of the antenna, and using the shortest cable can to connect the gateway to the external antenna.

If, however, we wanted another 3dBi gain, we could Opt for the Taoglas OMB.915.B08F21, for $161. The datasheet indicates that it is still a fairly uniform / 'omni' antenna (which leads me to believe that our 5 dBi antenna, for which we don't have a datasheet, is likely even more uniform):

Nootropic Design has a nice short article describing their deployment of a RAK gateway outdoors. We can ignore the GPS antenna; this might be a cheap option for getting the fiberglass antenna mounted as high as possible.

Despite the anticipated signal loss through the cable, it may be sufficiently difficult / inconvenient to place the gateway outdoors (lack of available wifi signal, wind / lightning / weather conditions), that it's worth using a low-loss cable to connect the gateway to the external antenna, and keep the gateway indoors.

If we need to use a long antenna extension cable, I've found some "Proxicast" Low-Loss Coax Extension Cable (50 Ohm) -- SmA Male to N Male, that seems to be a good option for low-loss cabling.

The seller provides a chart with the "total signal loss" over the course of the cable:

(Note: a general reference for signal loss per foot through various cable types at various frequences can be found here).

Patrick estimated about 40 feet of cable might be necessary: the chart indicates that the 50 foot cable option, at 900 MHz (our LoRa band), induces a loss of 2.2 dB.

I believe that this loss can simply be subtracted from whatever RSSI value we would have otherwise gotten with an 'ideal' (or very short) cable; and that it can also be subtracted from the gain of the antenna. Given that there are some LoRa base station antennas that are sold at 2 or 3 dBi, perhaps this loss is acceptable, so long as we try to maintain line of sight as best we can.

Even if we use a cable, we will still need to connect the gateway to the wifi network, and this may require extending its range with a WiFi range extender.

Two options that seemed to be promising were:

Otherwise, there are quite standard enclosures to be found online, with hinges, like this one used by Nootropic Design: 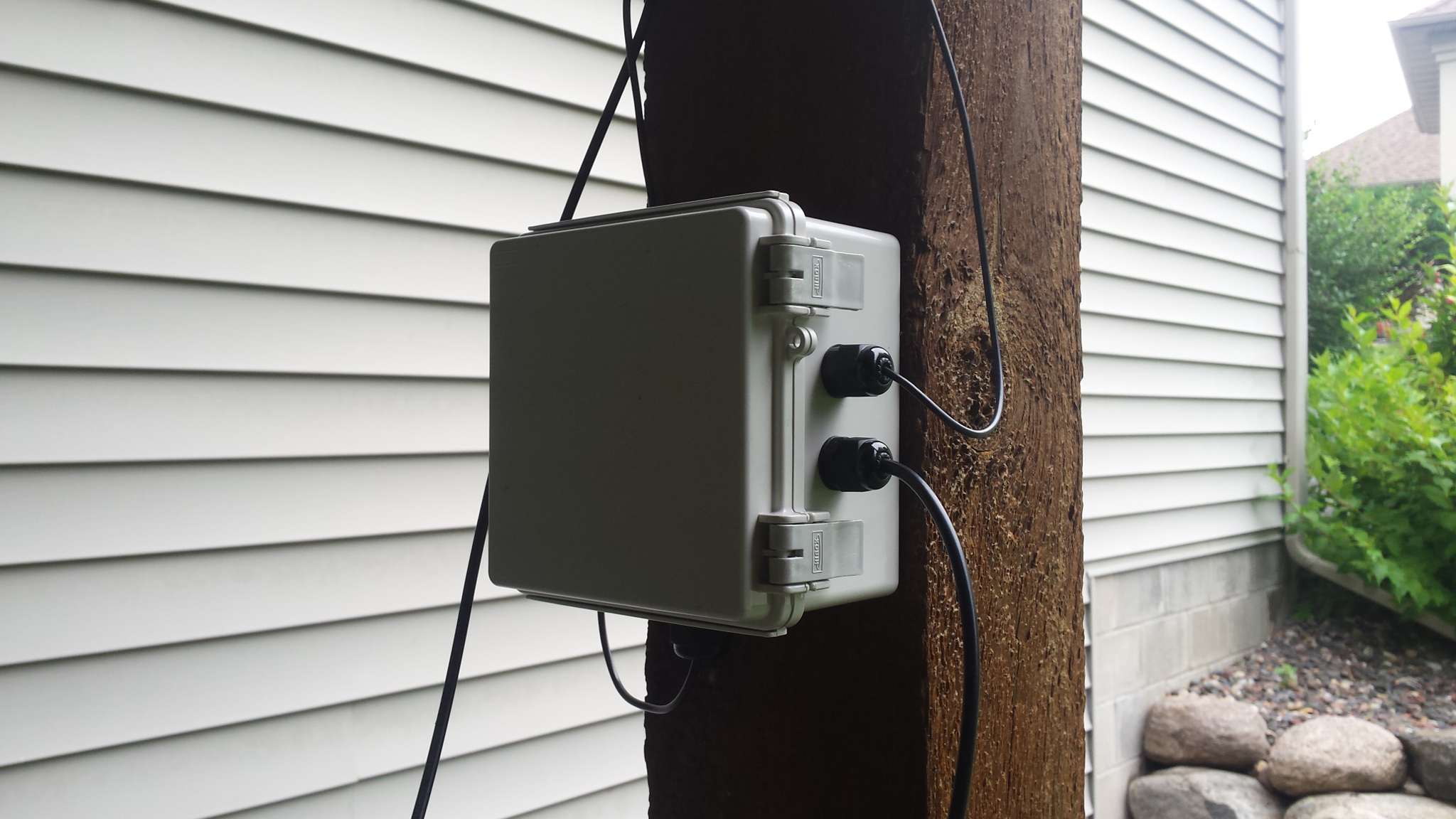 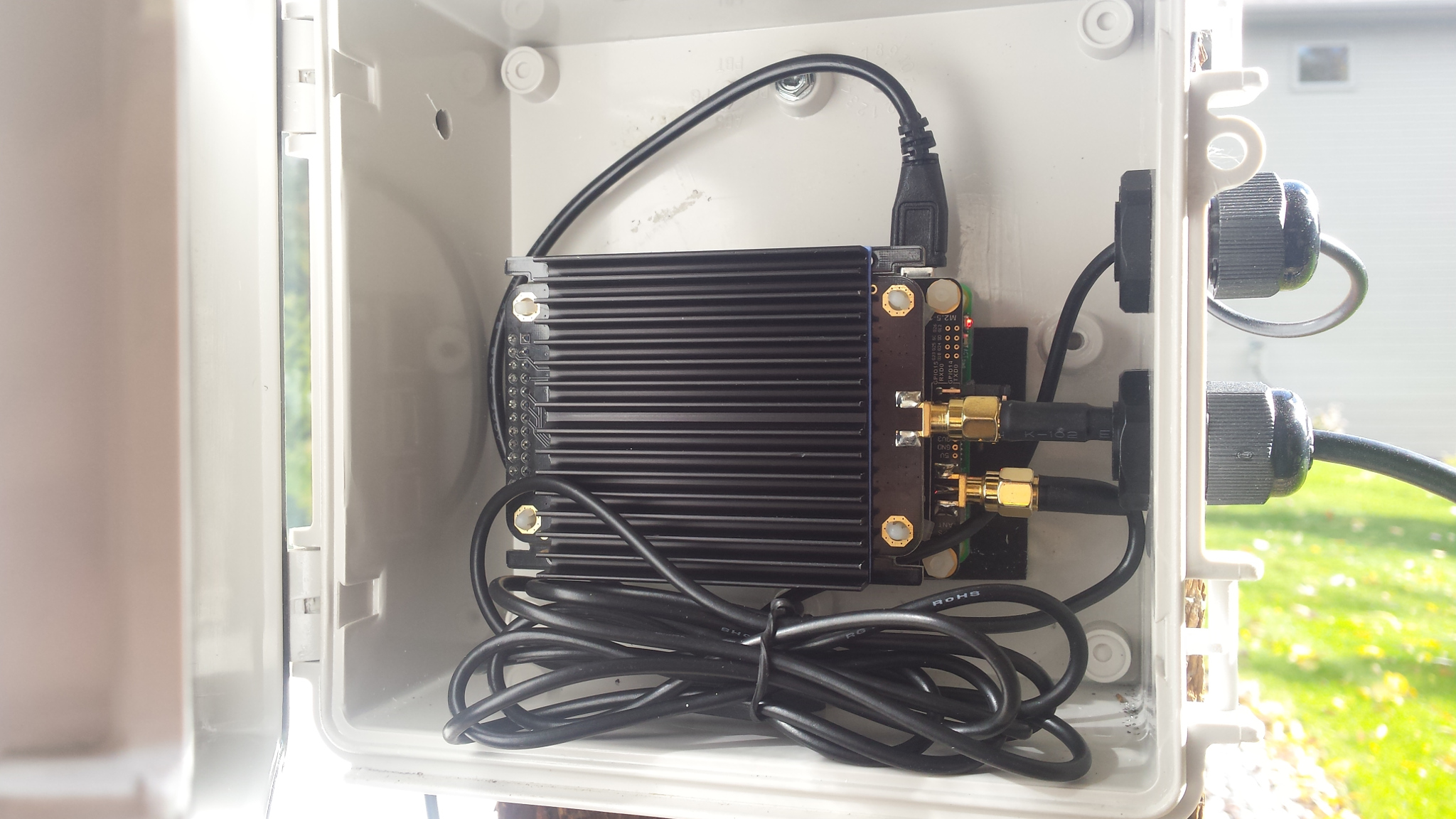 The RAK inside the above enclosure.

Seems to take about 2 minutes to join network at start.

Command for changing interval (in units of milliseconds) to 60 seconds:

This means that to connect a VH400 to the LSN50, the wiring is as follows:

as per above LSN50 pinout / terminal diagram.

Burning a MicroSD card image of the RAK OS

This will require three steps:

The Fresnel Zone. In order to achieve longer ranges and try to get good signal, there are two main issues to consider when placing the antenna:

There's a nice post on calculating line-of-sight horizon and Fresnel zone, which provides the following equations: 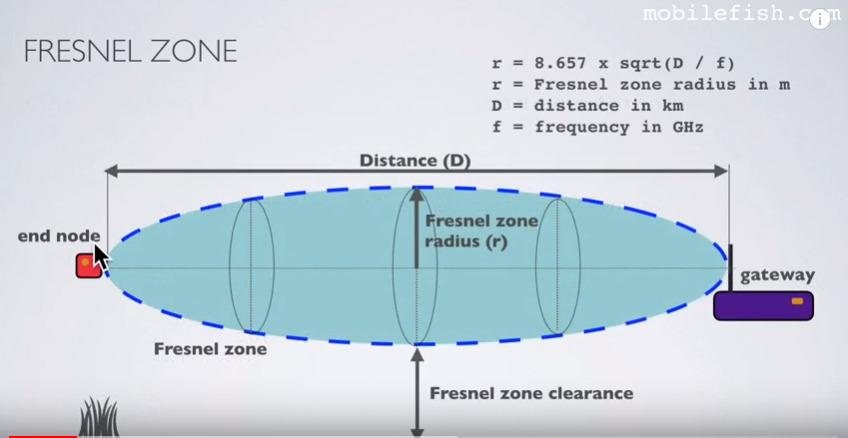 Note: at some point in above Youtube tutorial, they say that beyond 40% blockage, signal loss can be significant.

Tutorial also covers the allowance in meters needed to accommodate the curvature of the earth:

Our own Google Sheets calculator for 60% fresnel + earth curvature allowance:

Got timestamps working properly with data in Plotly. Interesting that an initial experiment with the LSN50 seems to show some periodic 'gaps' in the data when broadcasting at 30 second intervals. Wonder if this is inherent to the LSN50, to the gateway, or to some other part of the system:

When using drones, important to check the local airspace rules. This map is really useful: 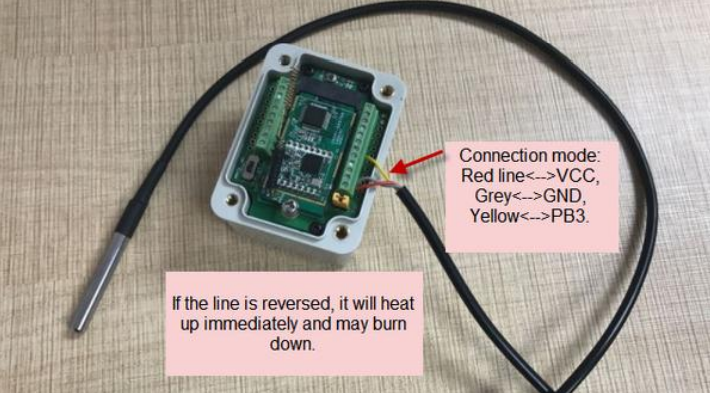 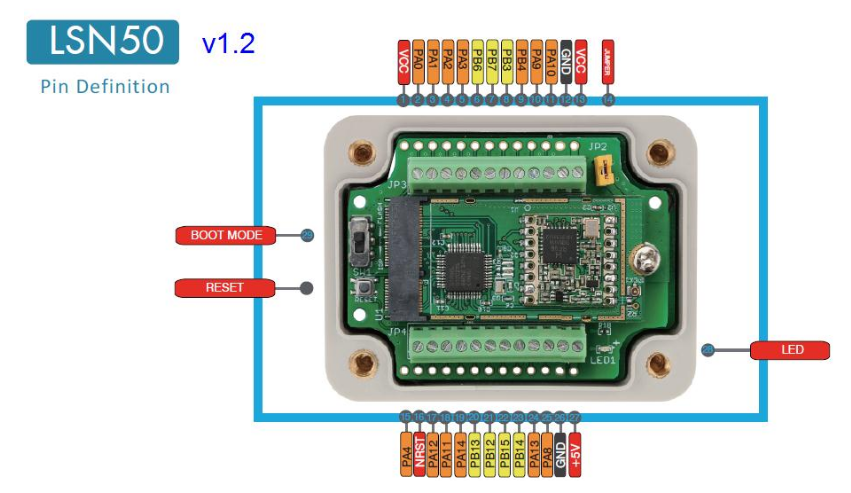 Data graphs / links. Links to LSN50 and Acclima data (from Kelly and from Don) at olathe.edgecollective.io.

Field testing and deployment. Below is a procedure for 'field deployment' of the EC Acclima relay -- it's a way of testing the LoRa connection in the field quickly (short sleep interval, i.e. 'LOW') with visual feedback (LEDs on), making sure that things are working properly, then setting it up for long-term deployments (LEDs off to save power, sleep interval 'HIGH', typically one hour).

You can find a video demonstrating the below procedure, here. 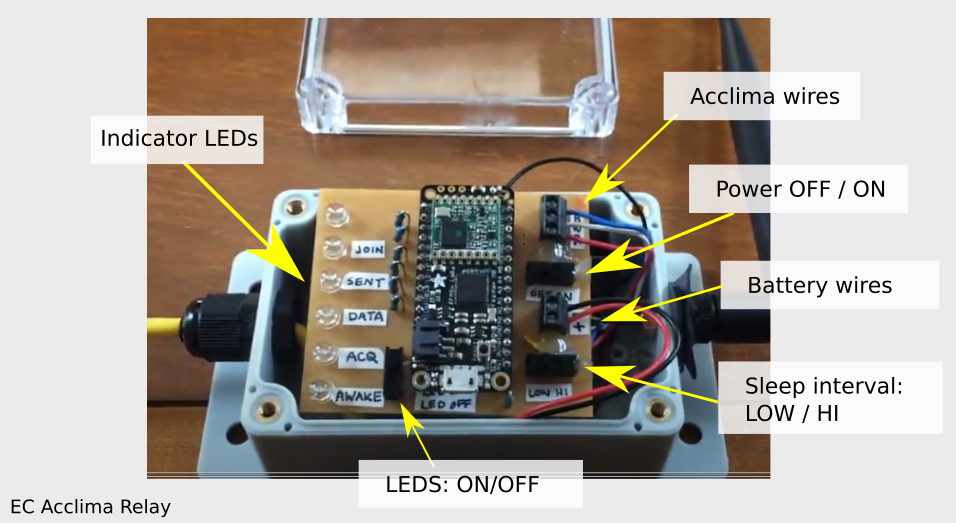 Witnessed odd behavior with the EC Acclima relay -- was not connecting. On power cycling, it connected, but sent odd data (values way out of bounds). [TO DO: POST PICS].

Then noticed that battery level was close to / just below recommended voltage for Acclima sensor.

Provisional diagnosis: the sensor was underpowered; this meant that originally it was causing the relay to fail to transmit to the gateway (the current firmware requires successful sensor data acquisition before transmit. TODO: rewrite so that it transmits 'error codes' (integers?)?).

Relay batteries were replaced, and now sensor is broadcasting regularly. 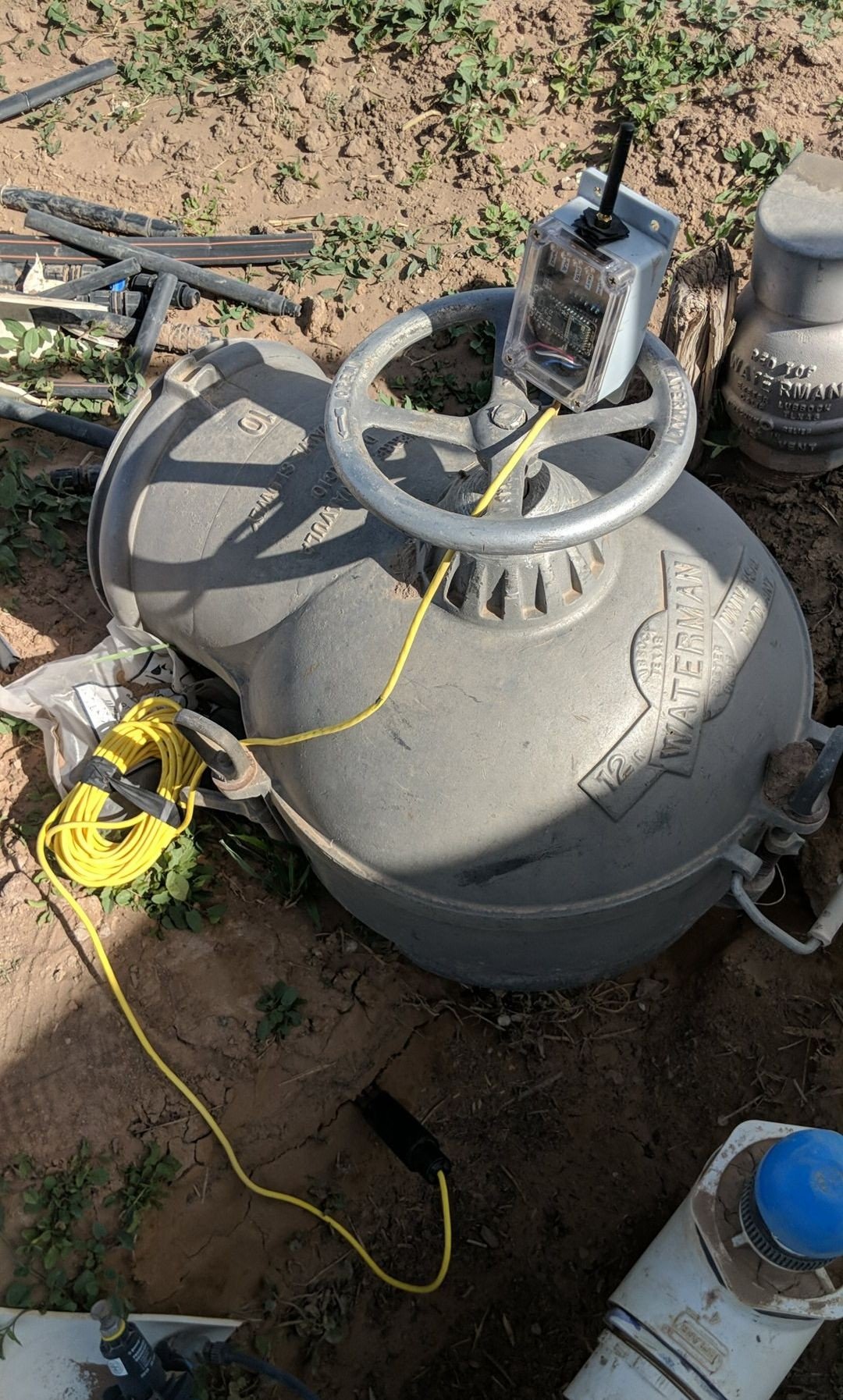 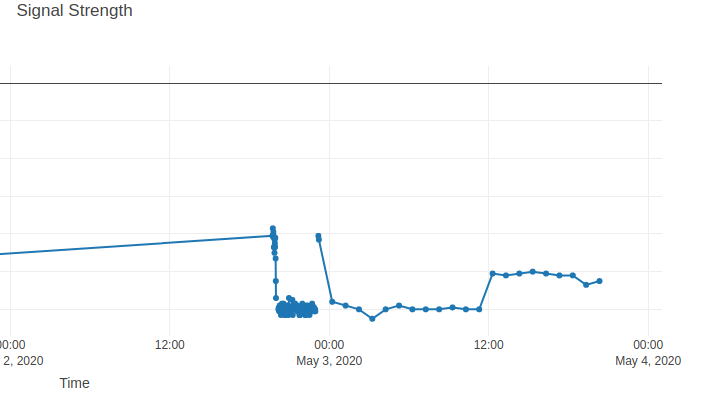 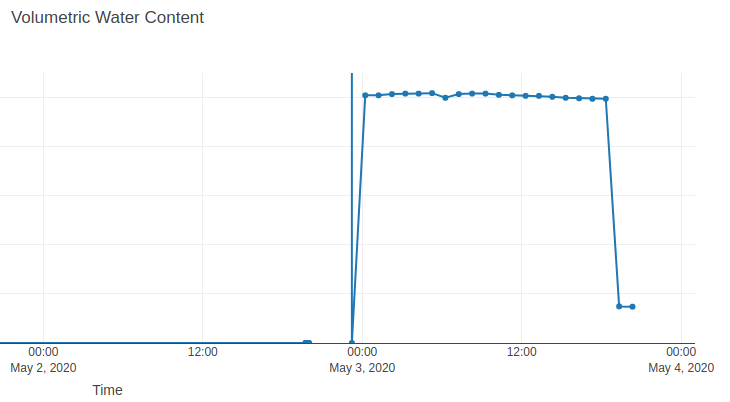 All of the sensors currently deployed in Colorado seem to exhibit a similar behavior -- a periodic 'missing data point':

Merits investigation to see whether the issue is on the gateway (likely) or has to do with some periodic feature of the local internet connectivity.

Note the Acclima relay code being used in CO currently is here. It uses the 'Cayenne' protocol in the OTAA mode. Also take care to note that this is in the 'sdi_failsafe' branch.

The EC Acclima relay is back to broadcasting steadily, even though the LNS50 is still periodically hiccuping. The missing LSN50 data point is consistently around the top of the hour (there's one that would come through at about :02). Wondering if the reason that the EC relay is sometimes solidly ever hour-ish for a stretch, sometimes not, is that its timer is a little more than an hour (I set it for an hour, but the measurement / transmit process takes up to a minute). This would mean that the EC relay's 'phase' would to in and out of sync with a 'top of the hour' broadcast over time. I think in contrast the LSN50 firmware is quite nicely set up to hit relatively precise sleep increments, so that setting it for '10 minutes' means 10 minutes. Or, because it is broadcasting every 10 minutes, instead of every hour, it's more likely that we hit that gap?

To figure this out, there is some math to be done about the relative phases, and some numbers to check. But a quicker check might be to look into the Chirpstack / RAK gateway itself. Perhaps we can even set up a 'curl' to ping a remote site every minute via HTTP, and see if there it goes 'dark' once per hour ...

Hit snag with dhcpcd.conf file -- the version that RAK OS provides is intended, it seems, to provide a static IP address / WAP / etc when connected to eth0. Solution seems to be to comment out all of the last 5-ish lines in the /etc/dhcpcd.conf

(Update: was able to do this. But ultimately switched over to ChartsJS for now, see below).

Couldn't quickly figure out odd dropped points bug when using Plotlyjs (should file a bug report?); switched over to Charts.js: 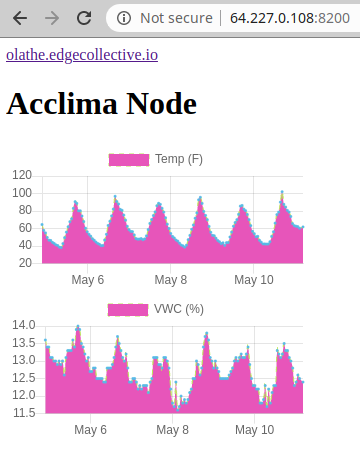 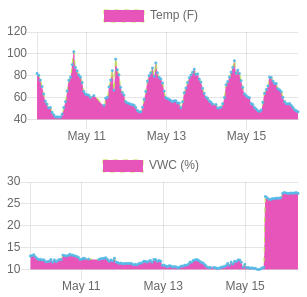 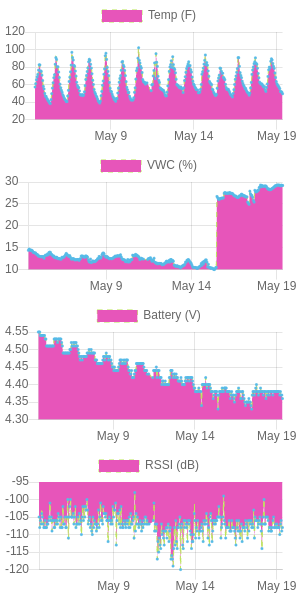 Note battery level -- we might last longer than original slope indicated, due to 's-shape' of AA-discharge curves ... 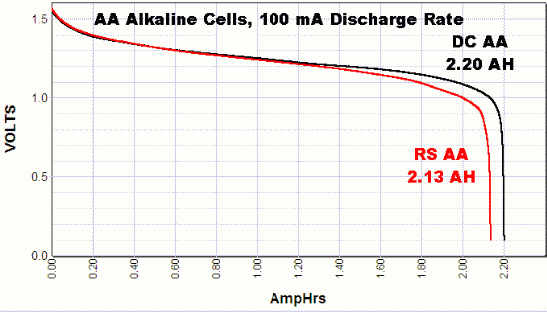 Testing another antenna on the remote node:

Checking to see whether David's Rak's NodeRed is piping data to Kelly's AWS NodeRed -- indeed it should be (ignore "no response from server" msg): 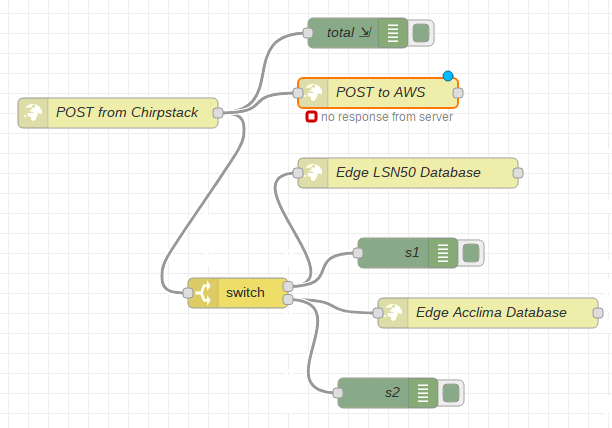 Looks like antenna switch resulted in signal drop. Also note that times on graph are in Mountain Time, not EST: 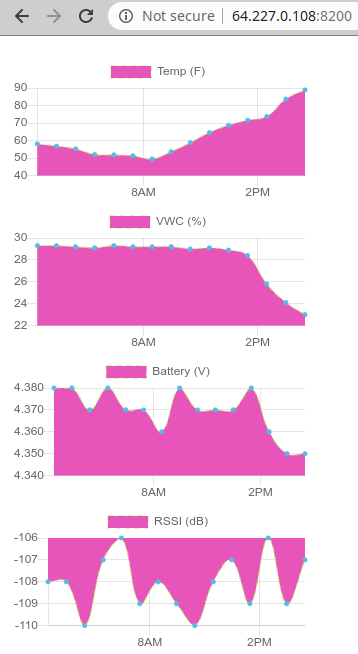